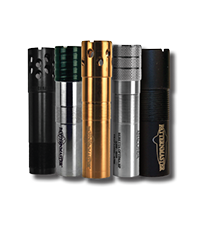 Patternmaster is the culmination of a single goal - how to have a better hunt. Approximately 20 years ago, as regulations were in place to ban lead shot from the marshlands, Patternmaster revolutionized the wing-shooting world with U.S. Patent #5,452,535. The idea was simple enough - create a more effective shotgun pattern to make steel shoot like lead - and they did it with a relatively simple but brilliant idea. The Science of Shot is what we like to call it.

Until the introduction of the Patternmaster tube in 1993, chokes used constriction as a way of controlling patterns. Constriction works just like a funnel, which does a good job of tightening the shot pattern. However, also like in a funnel, the shot cannot exit the barrel at the same time, which significantly lengthens the shot string, sometimes as much as 20 feet! (Shot String=distance from first BB to last as it exits the barrel)

As hunters, we rarely use a shotgun to hunt something that's not moving. A moving target combined with a long shot string makes it difficult to consistently muster enough pellets to knock down a target for a clean kill.

What makes the Patternmaster patent such an effective shotgun accessory for the hunter is the tighter shot string. A Patternmaster tube gives you a 2 to 3 foot shot string, compared to 15 to 20 feet from conventional tubes. The result is very simple; when you hit something you hit it with the maximum payload and energy. This means clean kills!

Patternmaster accomplishes this not by constriction but by the 5 studs cut out of the wall of our tubes. Where these studs are actually placed dictate the pattern each tube creates. Through about 20 years of research and develop we're pretty close to perfection. For a detailed explanation, see our videos located in our multimedia section. 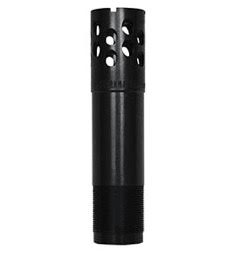 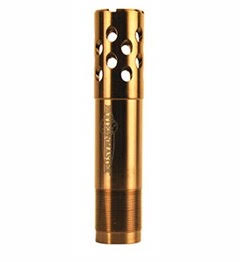 To combat the endless question, "What tube should I use?" Patternmaster developed a line of tubes that are game specific. All CODE BLACK tubes are made from 17-4 aircraft-quality Stainless Steel and have a Bronze non-reflective Titanium Coating for corrosion resistance. CODE BLACK 12ga tubes are available in: UPLAND, PIGEON, TIMBER, and DECOY (These tubes are similar in performance to our "Classic" Short Range tubes), DUCK (Similar in performance to "Classic" Long Range), GOOSE and BIG GAME (Similar in performance to "Classic" Extended Range). All of the CODE BLACK tubes listed above follow the same warranty disclaimer as our "Classic" tubes. And then there is the CODE BLACK TURKEY! Our Turkey tube design combines the best of both worlds! It has constriction to tighten the pattern and a set of three rings spaced evenly throughout the tube to slow the wad. Unique porting allows for gas release and aids in the active release of flight control wads. This tube is safe to use with Lead or Non-Toxic shot. Disclaimer for CODE BLACK TURKEY: Warranty will not be honored if using Slug ammunition or Steel Shot. 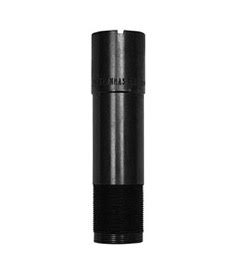 The Patternmaster Black Cloud choke tube is designed specifically for Black Cloud Ammunition. As popularity of Black Cloud ammunition grew, Federal approached Patternmaster about a design that would maximize this ammunition's lethality. Ten years later it's still a popular tube. Unlike our other Patternmaster tubes it's a constriction tube and doesn't contain much of our patented Patternmaster technology. However, we still build our Black Cloud tube right here in Holidaysburg, PA, with the very best American-Made 17-4 stainless steel in the world. Black Cloud tubes are available in 20ga, 12ga and 10ga. Because they're constriction tubes, they're offered in Full, Mod and Imp. Cyl. If you're a Black Cloud fan, you'll love this tube. This tube is designed for “shot” only. Shooting slugs with this tube is both dangerous and will void the warranty. 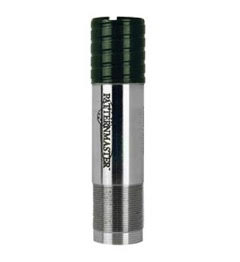 ANACONDA Gas Over Construction technology uses the gas that is produced to restrict the wad and control patterns. ANACONDA tubes have our patented "COIL ZONE" that is a precision-machined channel with a left twist to counter the natural right spin of the ammunition load. The channel fills with gas to surround and squeeze the wad to form consistent patterns. Due to the effort of the "COIL ZONE" there is no need to constrict the tube to smaller dimensions. Normal dimensions for a full constriction choke is 0.690. ANACONDA has proven to out perform the normal constriction choke with a constriction of 0.700. By opening the constriction, an ANACONDA choke is able to reduce the pressure build that may be detrimental to the life of a shotgun. 12ga ANACONDA chokes are available in LONG RANGE 0.700 (0.715 Mossberg 835/935) effective range of 30-70 yards, MID RANGE 0.715 (0.730 for Mossberg 835/935) effective range of 20-50 yards, SHORT RANGE 0.730 (0.745 for Mossberg 835/935) effective range of 15-40 yards, and the STRIKER 0.670 Turkey (0.700 for Mossberg 835/935) tube for use with Lead or Non-Toxic Turkey loads. All Anaconda chokes are constructed from the finest 17-4 Stainless Steel and have the extended portion coated in a field grade OD Green color. Disclaimer for ANACONDA tubes: Warranty will not be honored if using Slug ammunition. STRIKER Turkey tubes are not to be used with Steel Shot. 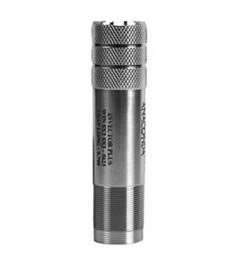 Our engineers and machinists understand more about manipulating gases, wads, powder and shot than anybody in the world. Also, we have all these U.S. patents just laying around in the summer-time. So we figured - Let's use 'em and build the world's best clays tubes - and the result is the Anaconda Shooting Sports Series features our patented Coil Zone™ technology. We hope you enjoy wearing out the competition as much as we did building and testing these animals!